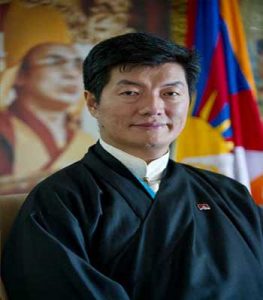 Dr. Lobsang Sangay is the first democratically-elected President of the Central Tibetan Administration (CTA) following the devolution of His Holiness the Dalai Lama’s temporal role in 2011 and is currently on a second presidential term post his 2016 win. He has unveiled the Five-Fifty vision: Shaping Tibet’s Political Future aimed at restoring freedom in Tibet and the return of His Holiness the Dalai Lama to Tibet in the 5-year term while simultaneously strategizing the Tibet movement for the next 50 years, if needed. He is the first Tibetan to earn a Doctor of Juridical Science and has organized an unprecedented series of conferences between Chinese and Tibetan scholars, including a meeting between His Holiness the Dalai Lama and 35 Chinese scholars. He has received a citation award honouring the democratic institution of the CTA as envisioned by His Holiness the Dalai Lama by the National Endowment for Democracy, Takasu Award by the Takusu Foundation, the Gold Medal for Outstanding Contribution to Public Discourse from the Historical Society of Trinity College, Rataan Samman by Hansraj College and Bharatiya Chatra Sansad. He is a legal scholar with expertise in international Human Rights law, democratic constitutionalism, and conflict resolution. He has given lectures, published in academic journals like the Journal of Democracy, East Asia and International Law, and consulted for media outlets globally.